How Do Rottweilers Show Affection?

NotABully.org may earn a small commission when you use one of the links on this page to purchase. 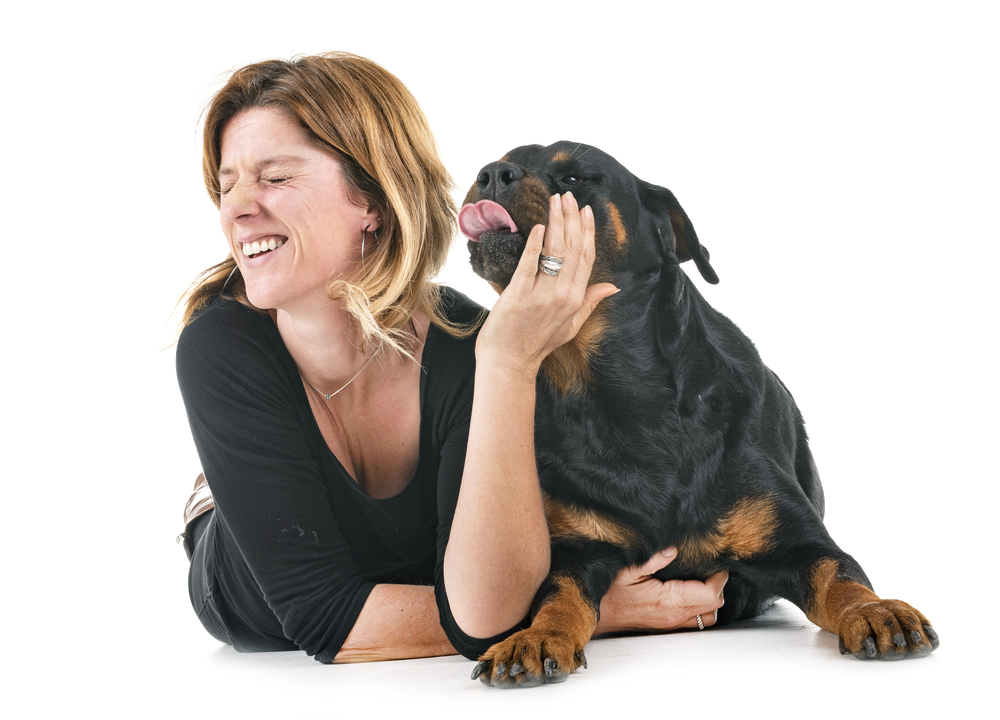 Dog owners certainly love to show their dogs some affection! We willingly give belly rubs, ear scratches, couch cuddles, exhausting play sessions, and everything in between. But how do our dogs—specifically Rottweilers—show love to us?

Rottweilers show their affection for their humans in a variety of ways. Oftentimes, it’s by touching—leaning against you, nudging your hands with their nose, or pawing at you. Sometimes they also may follow you around, wag their tail, or perform that unique Rottie “rumble.”

Before we take a deeper look at how Rottweilers show their affection, let’s explore why exactly Rottweilers are so affectionate.

Why Are Rottweilers So Affectionate?

Rottweilers are a very people-focused breed, and they are well-known for their loyalty. Because Rotties are so intelligent, they are sensitive to the people around them, which helps when forming a strong bond with their family. When a Rottweiler bonds with you, you’ll become their person.

Who Will a Rottweiler Be Affectionate Towards?

A Rottweiler will be very affectionate to anyone they consider to be their family—typically people they live with and people who take care of them. If you show them unconditional love, they’ll return the same to you.

Although Rottweilers will love their whole family the same, they may see one member of the family as the leader of the “pack.” This is the person they’ll look to for commands and who they’ll obey above anyone else.

So How Do Rottweilers Show Love to Their Humans?

Now that we know why Rottweilers tend to be affectionate dogs, let’s find out how exactly they show this affection by looking at the 7 most common ways that our Rotties say “I love you”.

1. Leaning Up Against You

Did you know male Rottweilers can weigh up to 135 pounds? If you own one of those love hunks, you’ll be feeling every ounce of that weight when they lean up against you.

It’s common for Rottweilers to lean up against you (or even sit on you!) to show you their love and affection. They want to be close to you, so they may force the snuggle factor even when it may be inconvenient for you.

2. Nudging Your Hand with Their Nose

There you are, sitting on the couch, immersed in your favorite movie when a cold, wet nose burrows in and starts nudging your hand. That would be your Rottweiler, wanting some attention. If your Rottweiler pokes you with their nose, they most likely want a head scratch or some cuddles. And since you’re their person, they trust you to give it to them.

They’re also making sure there’s no confusion in terms of what they want! They’re basically saying, “Hey, I see your hand. Here’s my hand. Figure it out!”

3. Putting Their Head in Your Lap

When a Rottweiler initiates contact by putting their head in your lap, they’re indicating that they trust you and love you. They’re probably also looking up at you with those big brown eyes (with their adorable little eyebrows) just begging for some attention or a good head scratch.

Your Rottweiler pawing at you could be another way for them to say “I love you.” Touch is a common way for them to communicate with you and express their feelings. Putting their paw on you could also be a way to ask for attention.

If your dog paws at you too much, there are a few steps you can take to minimize it. Reward only positive behavior. When he’s pawing at you, continue to correct him until he stops. Then, praise him.

Every heard of Rottweilers referred to as “Velcro dogs?” They have well-earned that nickname! Rottweilers stick by their humans so closely that they can tend to be a little clingy. Rottweilers like to follow their humans around from room to room, so that you’re never out of their sight.

Although you may get tired of tripping over your large pup every time you try to cook a meal in the kitchen or brush your teeth in the bathroom, this your Rottweiler’s way of telling you that they love you and are there to protect you, no matter what.

However, if your Rottweiler following you around is getting to be a little too much, you can tell them to tone it down. Make sure your dog is getting plenty of exercises and mental stimulation. Hopefully, they’ll be worn out enough to want to take a break!

You can also teach your Rottweiler the command “stay.” Start by keeping them in place for short amounts of time in an area where they can still see you, and then gradually work your way up to where you can leave the room for several minutes while they still obey the “stay” command.

Although this one isn’t necessarily unique to Rotties, they definitely do it too! Tail wagging is a sign of happiness, friendliness, and willingness to interact, especially when they’re in a relaxed body posture.

While some Rottweilers have had their tails docked for various reasons, it’s still very cute to see their little nubs happily wagging away!

People who are unfamiliar with Rottweilers could mistake this low, deep-throated sound as a growl. In fact, it is anything but! Rottweilers make this low rumbling noise (also referred to as “purring” or “grumbling”) when they’re exceptionally content or happy. Check out this cute pup showing off his motor:

You may hear it while you’re scratching your Rottweiler’s belly, rubbing their ears, or snuggling with them on the couch. Take it as a compliment! It means your Rottweiler loves you and is comfortable and relaxed with you.

Although puppies can and will show affection in any of the ways we just talked about, they can also be a little more unique when it comes to loving on their owners. Puppies are naturally more playful and rambunctious, so those traits will carry over into how they express love.

Licking You. A Lot.

Puppies use their tongues to get their mom’s attention. They’ll frequently do this when they need something, but it also is a sign of submission, respect, and attachment. Even when they grow up into adult dogs, they may continue licking out of habit and for these very same reasons.

Yup, believe it or now, your puppy jumping on you is a sign they love you. It’s a form of greeting and a way to show they’re excited to see you.

However, even though it may be cute when your tiny puppy tries to jump on you, it won’t be nearly as adorable when your 135-pound adult dog barrels you over in greeting every time you step in the door. Nip this habit in the bud by teaching your puppy a more appropriate greeting, such as sitting whenever you walk in.

Chewing on Your Stuff

This may be the number one puppy crime that people get frustrated about. Although there are tons of reasons for chewing (teething, boredom, separation anxiety, just to name a few), your puppy may try to chew on your stuff in particular because it smells like you. They miss you.

Like jumping, chewing is something puppies need to be trained out of early on and one of the best ways to do that is giving them an appropriate toy to chew on. But even as a puppy, Rotties have a powerful bite force that can make short work of many toys. I like this Tikaton chew toy on Amazon for big pups and the beef flavor will make it much more appealing to your puppy than your shoes.

Whether or not a dog will be affectionate depends less on male/female and more on how they are brought up when they’re a puppy. Behavior and affection will also depend on whether or not the dog has been spayed or neutered.

Speaking in more general terms, male dogs tend to be more assertive. When they’re showing you affection, or when you’re loving on them, make sure it’s happening in a way that’s affectionate and not assertive and pushy. In other words, make sure you Rottweiler isn’t just demanding to be pet.

Females may tend to go through more emotional phases. They may want to be left alone at some points. However, females reach maturity at a younger age than males, so that may play a role in behavior as well.

Above all, the way you have trained your dog and how bonded you are to them will be much more important than whether they are male or female.

What Are Healthy Ways to Show Your Rottweiler You Love Them?

But how can you show your Rottweiler you love them?

Here are a few ideas:

Give Your Rottie Some Pets!

Pet your Rottweiler with big gentle motions on their belly, shoulders, or neck. They’ll also never say no to a good scratch on the butt or behind the ears. Give your Rottie a good pet a few times a day, and they’ll love you forever! Many Rotties enjoy brushing enough to be considered a form of petting. Not only will some quality brushing time show your Rottie that you love them, but it can also help with shedding!

Although every dog is unique and different in what they want, many Rottweilers want to be close to their owners. If your dog is well-socialized and trusts you, chances are they’d love to snuggle up with you on the couch or curl up in your bed.

Rottweilers are active dogs and need lots of exercises—at least an hour a day. Go for a long walk or run with them, take them to the dog park, or play a fun game! Your dog will be happier and healthier for it.

Rottweilers are extremely lovable dogs! They show affection by spending time with you and communicating with you. They are very loyal, and they’ll forever appreciate you showing them a little love back. 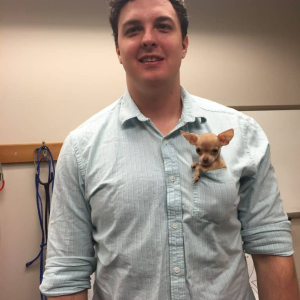 Logan is a committed bully breed lover! Growing up with a family full of pets and a lifelong passion for animals he pursued work in the veterinary industry. After 10 years, he started NotABully.org to help the world understand that breed doesn't make a bully!

Why Won’t My Dog Sleep With Me Anymore?

Do Rottweilers and Pugs Get Along? 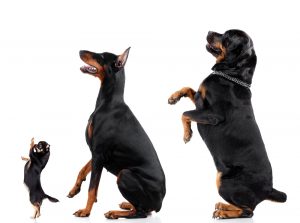 Do Rottweilers and Dobermans Get Along?

NotABully.org does not intend to provide veterinary advice. We go to great lengths to help users better understand their pets; however, the content on this blog is not a substitute for veterinary guidance.

NotABully.org is a participant in the Amazon Services LLC Associates Program, an affiliate advertising program designed to provide a means for sites to earn advertising fees by advertising and linking to Amazon.com. *Amazon and the Amazon logo are trademarks of Amazon.com, Inc., or its affiliates. Additionally, NotABully.org participates in various other affiliate programs, and we sometimes get a commission through purchases made through our links.